As The Open Championship approaches, this is the first week we start to see the world’s best fractured by the Atlantic Ocean. This week and next will see more and more head over to the UK to get their links golf boots under them by playing in the Irish and Scottish Opens. While the field for this week’s Rocket Mortgage Classic in Detroit, Michigan, remains fairly strong, next week should see a huge swing towards Europe where five of the world’s top 10 golfers will tee it up at The Renaissance Club. To accommodate such a field and to prepare for The Open, we’ll switch it up next week and do a European Tour preview rather than our traditional PGA preview.

Detroit Golf Club is a 7,340-yard par 72 located just northwest of downtown Detroit, Michigan. It’s one of the easier courses played on the PGA Tour, playing almost two strokes under par. Fairways are 2% easier to hit than an average PGA course, greens are 7% easier to hit, and scrambling is almost 5% easier. All this adds up to low scores for everyone, which is what’s unique about Detroit GC.

Most easy golf courses come with some manner of risk/reward. Low scores are for the taking, but hazards make the course highly variable and big numbers can knock golfers out of a tournament in a hurry. Detroit Golf Club doesn’t really have that feature. It’s easy, but not particularly high-variance. Much like we saw last week at the Travelers, where the leaderboard on Sunday had more changes than a Jethro Tull song, this week should feature a congested leaderboard with rapid changes.

Looking at the course itself, the three reachable par 5s are where the majority of scoring will come from. All play well under par and offer frequent eagle opportunities. The first par 5 on the course is the longest, and while 635 is daunting, it still plays relatively easy despite the lack of eagle opportunity. The closing hole is the only hole that features any real trouble. There’s a ditch separating the fairway from the green, and, with the amount of rain the area has gotten, there’s potential for the ditch to be a water hazard this year.

Par 5 scoring will be paramount this week, which of course means length off the tee is important. That being said, with greens in regulation so readily available, golfers who bring a hot putter are sure to compete. In the two-year history of this event, just two players have finished in the top 20 while losing strokes on the greens. Additionally, around the green game is almost a non-factor since most players are on the green to begin with.

The field isn’t particularly strong, but neither is it weak. FRACAS has the field with almost the same strength as the Wells Fargo, weaker than the last two weeks but considerably stronger than the Palmetto Championship prior to the U.S. Open. With 156 golfers in the field part of the strength comes from the size of the field. As we’ve mentioned in past previews, 156-golfer fields create so much more variability in terms of making the cut, and typically have weaker weekend fields due to the watered down total field strength.

For the second week in a row, FRACAS likes Patrick Reed to win a PGA Tournament. Last week, Reed finished tied for 25th. It was a disappointment for Reed, but the big number to look at is his Strokes Gained: Putting. Reed lost 2.8 strokes on the greens last week, the most he’s lost in a tournament since May 2019. That probably isn’t going to happen again. Tee to Green he was 5th in the field, gaining strokes off the tee, on approach, and around the green. That’s good form for Reed.

The course itself isn’t a perfect fit for Reed’s game. He gets a bump down in FRACAS on this course compared to average PGA courses, but he’s in such fine form that the model still believes he’s the winner. In spite of an overall decrease in FRACAS, the short/easy par 4s is where Reed can separate himself from the field. He’s projected to gain the most strokes in the field on those holes, which are the first, second, and eighth holes on the course. If he starts on the front nine with his first round, it would not be a shock to see him four or five under par as he’s making the turn.

Reed and Bryson DeChambeau have almost a 20% chance to win this tournament, per our model, and at 10.44%, Reed edges out DeChambeau as our pick this week. We have his odds at less than 10/1, which is also a value from the 12/1 we’re seeing in the consensus market.

Three weeks ago, the PGA Tour got two new members: Garrick Higgo and Mito Pereira. Higgo gained his card by winning the Palmetto Championship while Pereira got his by winning three Korn Ferry events in a single season. Both are in this field and both are players we love this week.

Higgo is coming off back-to-back missed cuts on the number in 156 player fields, which has led to the markets souring on him a little. However, looking at his rolling FRACAS he’s lost very little ground from a projections standpoint. If we dig into his numbers a little bit, we can see it’s the short game that’s been to blame for the last two weeks. His off the tee numbers are still great and his approach numbers are in the positive.

What makes Higgo particularly intriguing this week is the course fit. Detroit Golf Club encourages driver use, and Higgo is among the best with that club and he also dominates par 5s. In this field, Higgo has the highest projected strokes gained on both types of par 5s. He should have multiple opportunities to make eagle each round. Additionally, Higgo’s struggles come on both types of difficult par 4s. Detroit Golf Club has just one of each so the course won’t have many opportunities to exploit his weakness. We have Higgo at 17/1 to win, and he is our third favorite. The consensus odds have him at 47/1, which makes him a strong value play.

Pereira is another relative unknown. The 26-year-old Chilean turned pro in 2015, where he promptly won his Korn Ferry card by finishing first in the PGA Tour Latinoamerica standings. Though he didn’t have the immediate rise he hoped for and had quite a few bumps along the road, it all came together in 2021 for Pereira. Since March of this year Pereira has been on an absolute tear. In nine starts he hasn’t missed a cut, finished in the top 10 five times, and has two wins. Yes, it’s the Korn Ferry Tour and the golfers he’s competing against are not the best in the world. But a run like that is not particularly common, and it’s clear he’s found something.

Not only is Pereira in fine form, this is also a spectacular course for him to make his debut. In his three wins his winning score has been -20, -21, and -27. Pereira specializes in birdie-fests and the underlying data backs this up. His best holes are long/easy par 4s, short/easy par 4s, and both types of par 5s. At Detroit Golf Club that’s 12 of the 18 holes. In his debut our model gives him about a 34/1 chance of winning, a strong value over the 80/1 presented in the consensus. 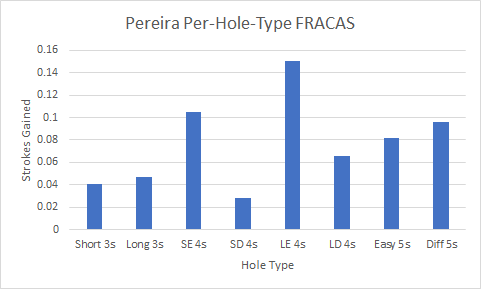 Down the board a little further is another golfer we like the value on. Lefty Hank Lebioda made a brief appearance atop the leaderboard at the Travelers before stumbling to start his back nine. He’s been hot lately, with five made cuts in a row and coming off a top 5 finish last week. It’s a great course fit for Lebioda, who prefers conditions scorable and long. He’s in the top 15 in the field in projected easy par 5 scoring and 5th in short/easy par 4 scoring. The market has him at 124/1, which is a huge number to put on a guy coming in hot on a course that fits his eye. Our model puts Lebioda at 57/1 to win, less than half the consensus odds.

We evaluate players at the percentage of time they appear in the top 10% of DraftKings in our simulations, while also setting a floor on which players qualify. Additionally, we’re comparing expected times in the top 10 vs. expected, relative to salary, in order to pick which players we are interested in.

The top two in salary stand head-and-shoulders over everyone else above $9,500. Together they have almost a 20% chance of winning the tournament and our model expects both to finish in the top 10% of DraftKings scoring greater than 55% of the time. They’re expensive, but we’ll give some quality low-priced options to pair with them a little further down.

Just two in this range. Kokrak is likely to be the highest owned golfer on the slate, but Bradley will offer some ownership relief. He’s coming off two missed cuts, but the ball striking has remained great and at $9,000 he’s a great value.

Higgo is our best value of the slate, but Grillo is not far behind. Grillo let a lot of people down last week, but he lost all of his strokes on and around the greens. Putting is always a concern, but there’s nothing stopping Grillo from stuffing it close repeatedly on this course.

We’re highest on Lebioda and Alex Noren in this range. Noren’s price is depressed a bit coming off his missed cut, but he missed on the number and his form is still strong.

Quite a few options we like in the $6,000 range this week. Robert Streb is our favorite of the group, and can really light it up with the putter. With very little trouble off the tee, he can take advantage of easy greens to hit and make some long putts.