The NBA Draft Combine has come and gone. We’re taking a look at the players whom teams are seeing in a new light after outstanding performances.

It’s been a long couple of weeks in Chicago for NBA executives, agents, trainers, and hopeful draftees. Following the G League Elite Camp, NBA Draft Combine, and a slew of agency pro days, the 2021 NBA Draft class is taking shape and becoming a bit clearer. While there will certainly be more information to be gleaned the next four weeks following the early entrant withdrawal deadline, at the Minneapolis pro days, and via other private team workouts, several prospects have made strong pushes and significantly boosted their draft stocks with impressive NBA Combine showings.

Let’s dive into some combine week standouts whose draft stocks are rising following their performances in Chicago.

Grimes’ draft stock has been quite the rollercoaster. He was the FIBA U18 MVP, a McDonald’s All-American, and a top-ten recruit who arrived at Kansas with one-and-done lottery pick expectations. Grimes struggled mightily as a freshman, and ultimately transferred to Houston after testing the NBA Draft waters and receiving poor feedback. While many high pedigree prospects would have folded under these circumstances, Grimes put his head down and worked relentlessly on improving his game.

Following a Final Four run, AAC Player of the Year honors, and being named an AP All-American, Grimes was still generally perceived as merely a late second-round prospect. That quickly changed following his performance in Chicago.

Grimes led the event in scoring at 27.9 points per 36 minutes on a blistering 78.0 TS% and knocked down 9 three-pointers over the course of his two scrimmages.

While this may have been a dose of hot shooting, it serves as a microcosm of Grimes’ vast improvement as a versatile shotmaker this season. Grimes was a 33.3% three point shooter on 288 attempts (4.4 3PA/G) throughout his freshman and sophomore seasons. This year, he upped his efficiency and volume, knocking down 40.3% from deep on 248 attempts (8.3 3PA/G) and was one of only three NCAA DI players this season to knock down 100+ three-pointers.

Grimes’ shooting versatility from deep is what draws the most interest from NBA scouts. Not only is he capable of knocking down open catch-and-shoot looks, but he’s able to stick shots from deep off-the-dribble with defenders in his face.

Among NBA Combine attendees with 50+ contested three point attempts per AutoStats player tracking data, Grimes was the most efficient shooter. 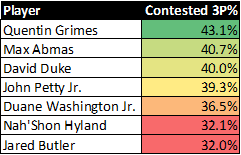 While Grimes’ shotmaking was certainly the focal point, he also impressed with his all-around game by battling on the glass, diming up teammates, and giving great effort defensively.

Grimes was one of only five prospects to accumulate 10+ rebounds and 5+ assists throughout the combine scrimmages. He shot 60.0% from the field while the other four shot a combined 37.7%.

Grimes likely played himself into a guaranteed contract with an outside chance of sneaking into the late first round.

“Bizzy Bones” certainly got busy in his time in Chicago, making up for a lost NCAA tournament berth and proving his mid-2nd round consensus draft ranking to be selling him quite short.

Hyland was the clear standout of the first Combine scrimmage, notching a blistering 77.3 TS% and knocking down several deep off-the-dribble step back threes in the process. While space-creation and shooting range are his bread and butter, Bones showed there’s more to his game by snatching six boards, dishing out four assists off of live-dribble reads, and leveraging his 6’9 ¼” wingspan to cause chaos defensively and rack up three combined steals + blocks.

Hyland opted not to play in the second scrimmage, and understandably so. He did, however, continue his impressive showing with a lights out shooting display at the NEXT Sports pro day.

While he certainly showed out at the combine, this isn’t merely a flash in the pan. Bones has consistently displayed a rare combination of shooting volume/efficiency and defensive playmaking in a high usage role at a young age that has only been exceeded by one other prospect in the past 15 years.

Hyland has vaulted his stock to that of a guaranteed contract and potentially even a late first-round pick.

Coming into Combine week, Wieskamp’s draft stock was in the late 2nd round / two-way contract range. Wieskamp spent most of his career in the shadows of Naismith Player of the Year, Luka Garza, but solidified in Chicago that he is Iowa’s clear best NBA prospect.

Wieskamp first turned some heads with surprisingly elite measurements and athletic testing, measuring in at 6’7 ¼” in shoes with a 6’11” wingspan and tying for the fourth-best max vertical leap at 42”. He also notched the fourth-fasted lane agility time at 10.70 seconds and tied for the sixth-fastest ¾ court sprint at 3.04 seconds.

Wieskamp had a fairly quiet first scrimmage showing, but left quite a lasting impression with a 26 point, 10 rebound, 3 steal, 1 block performance to cap off his week in Chicago. The most efficient three-point shooter of all NBA Combine attendees this season (46.1 3P%) certainly lived up to his reputation, going 8-of-13 from the NBA three point line over the course of two scrimmages.

Wieskamp will now likely get looks in the early second round and warrant guaranteed contract consideration.

As noted in our combine preview, Sims is a lengthy, fluid, pogo-stick athlete with some ancillary rebounding skills that flew under the radar within the context of his role at Texas. Sims measured tremendously and absolutely showed out in the athletic testing portion of the NBA Combine.

He had the second longest wingspan and 7’3 ¼. He weighed in at 250 lbs on only 5.5% body fat. His max vertical leap was excellent at 44.5’’, but his standing vertical leap was even better. It came in at 37’’, second-best at the combine this year and top five in the last 20 years. His ¾ court sprint was the best among frontcourt players, and one of the best overall.

Not only did Sims prove that he has elite tools, but he made functional use of them on the court during scrimmages. Sims eclipsed double figures only 35 times in his four-year career at Texas and never averaged double digits in any single season, but was an absolute force in the paint during his two combine scrimmages, finishing as the event’s third leading scorer on an ultra-efficient 73.7 FG%. Not only did he thrive as an above the rim finisher, but he also showed encouragingly soft touch on a long floater.

Sims signed with Klutch Sports following the Combine, and solidified himself as a likely draft pick.